I didn't realise that April flew by and I didn't blog a sentence!!! Well exams were over and I was getting adjusted to having kids home the full day! I love them ! In the midst of constant cleaning and feeding the brood(thankfully just 2!!) I managed to get a whole lot of crocheting done! I also started a CAL for the lovely Seraphina shawl on Ravelry and have got 25 rows done! 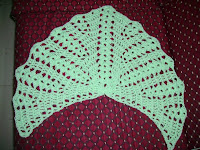 Its becoming tedious so I put it down and have since started on the 2009 crochet squares CAL on Ravelry
and Craftster. I have caught up to April and also decided to do the Calendar CAL found at the
Dishcloth Diaries blog.
My Craftster squares till April can be found flickr...
Middle of April my  crochet student of 3 years returned from her school and asked me ever so
politely"Aunty may I come for crochet classes?" I was thrilled and said but ofcourse!! so now my afternoons are spent soicialising with 12 yr old girls(my dd also wanted in!) So what do I teach them that would be quick and new to them??? They saw my Waldo Square and immediately wanted that to be their first project except they didn't want a square but would do a garland of linked circles!
Second was a wiggly crochet mat which gave them more pleasure telling" wiggly crochet" rather than doing it! they did manage to get their foundation mesh done and both of them had the mesh count wrong and didn't want to rip it out! So I told them to improvise and finish the wiggly using their imagination. My dd just did a plain spiral but my student is yet to finish. The pattern came from here.
Here are our almost finished wiggly crochet pieces:)

The spiral that my dd did in wiggly crochet led me to teaching them how to do spiral crochet with the help of the dishcloth pattern found here.
So today we finished the spiral crochet square and much to their delight they said they liked working on it!
Will post their pictures once they finish:) Here is mine..

Thats it for now more tomorrow as I finish sewing in the ends to my squares  plus my student's works!!!
In the mean time I hope you enjoy looking at my student's projects that she made the last time she visited me:) 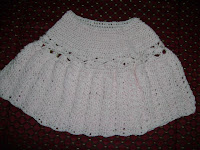 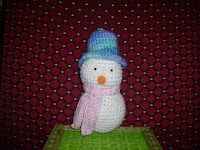 This is a Flickr badge showing public items from yarn_around tagged with crochet. Make your own badge here.